It’s been a week since The Feast Conference: Joyful Joyful ended. It’s been both a humbling and grace-filled experience to be part of the largest inspirational event in the country. It’s my first time to serve as a speaker there. To be honest, when I first received the invitation to speak, I wanted to say no. I was scared and thought, why me? I felt I was a writer and not a speaker, comparing myself to those whom I knew to be powerful speakers who had years of experience. But God made me realize that He had prepared me for that moment by allowing me to go through a lot of speaking engagements like He trained the young shepherd boy David to kill bears and lions first before meeting Goliath. And if there’s anything I’ve learned about myself is that when I don’t want to do something, that’s when I should do it. And it’s when I’m too eager to do something– that’s when I should not. Because I know that when I want to do it too much, I am doing it for my own self-interest and ambition; but when God asks me to do something and I don’t want to do it, I know that my intention would be pure. The task itself would make me depend on His grace. So despite my initial hesitation, I said yes. After all, it wasn’t about me, it was about God who gave me the assignment.

The preparation for the talk was in itself an adventure. I had talking points in my head, but of course, God had a better plan. 🙂 Whenever God assigns me to give a talk, He sends experiences to make my testimony authentic and true. Like when He knew I was to speak about rejection, I would experience rejection a week before the event so that I would really know what I was talking about. I hadn’t cried that much in a long time, and I realized that I must have been crying for others too who were going through the same thing. I felt God allowed the pain for me to experience, but He also comforted me afterwards with insights that came from Him. I wouldn’t have realized them if I did not go through it. It is true what the Scripture says, “God comforts us in all our troubles, so that we can comfort those in any trouble with the comfort we ourselves have received from God. For just as the sufferings of Christ overflow to us, so also through Christ our comfort overflows. (2 Corinthians 1:3-5).”

I realized too that a lot of things can happen in a live event such as this. And we cannot discount what happens behind the scenes especially beyond what our eyes can see. A few hours before my talk, my wifi got disconnected. I believe a lot of participants got disconnected too. I had to go and look for kind Internet providers around our village (that is, titas and friends) to lend me their Internet connection but to no avail, until one tita pointed me to the direction of our parish church, which kindly shared with me with their Internet connection. Interestingly enough, I was just there in the morning, asking Mama Mary (they were saying a novena to her) to help me with the talk. And I found myself there again later that day. I really felt her protection and care. And through her intercession, I believe that God provided for what I needed just like she did at the wedding at Cana. I can just imagine her saying, “Jesus, she has no wifi!”

When it was finally time to give my talk, I got disconnected to the Internet twice before we went live on StreamYard. When I finally shared my keynote presentation, the slides covered my whole computer screen that I had no way of finding out if I was still live or not. I tried to look at my phone but I couldn’t send and receive messages, as the signal inside the office was poor.

Despite the challenges of not seeing whether I was still connected or not, I continued speaking. I was a little worried and anxious in my head, but I kept speaking from my heart. I think God answered my earlier prayer for Him to take over! And how He took over! Only by grace! I felt that while I was teaching, God was teaching me at that moment too. I also believe that He was teaching beside me. Although I couldn’t see what was going on, I needed to trust Jesus. I felt like Peter walking on (digital) water. It was virtually dark. I had no way of knowing whether I was still live or not. I waited for texts on my phone but none came. I continued to speak despite not knowing what was happening out there. I had to trust that God was working behind the scenes even though I could not see how things were working out. God was asking me to trust Him. After all, it was His plan, His words, and His work. I was just an instrument, albeit a very grateful instrument.

After over an hour of speaking, I ended my presentation, and it was the only time when I learned whether my talk went through. Praise God because it did! I saw the time stamp as to when the streamyard ended: 1 hour and 17 minutes. Whew! Though I couldn’t see, I still finished the slides. I just learned later on that I got disconnected before the last part but I had already been able to share the most important parts. Praise God! I believe that was how God wanted it at that moment. Only what is essential. Only what is needed. Only what His grace allows because He knows what’s best. What an experience of walking on water and dancing on the waves. It was God’s victory! He proved that He was in control, despite what I felt and could not see.

Friend, how about you? Where is God asking you to walk on water? Is there something in your life that you can’t see yet but God is asking you to trust Him in this area of your life? To let go and let Him take over? Is it in your work and finances? Is it in your ministry or family? Are you worried about what the future holds? Or maybe it’s your love life, you’re wondering if God has a plan for you? I know He does.

Trust that God is working behind the scenes. You can’t see what’s happening behind the spiritual curtain, but God is on the move. He sends His angels before you, arranging things on your behalf. He is working all things for your good.

Take that step of faith, surrender to God, and trust Him. He is trustworthy! I know this to be very true!

So, let’s let go and let God take over!

Do-It-Yourself Writing Retreat:
Bring Your Book to Life in 3 Days.

A step-by-step guide to jumpstart writing your first book

Is there a story in your heart that longs to be told or an important message that needs to be shared? Has writing a book been on your bucket list for the longest time? This book can help you. 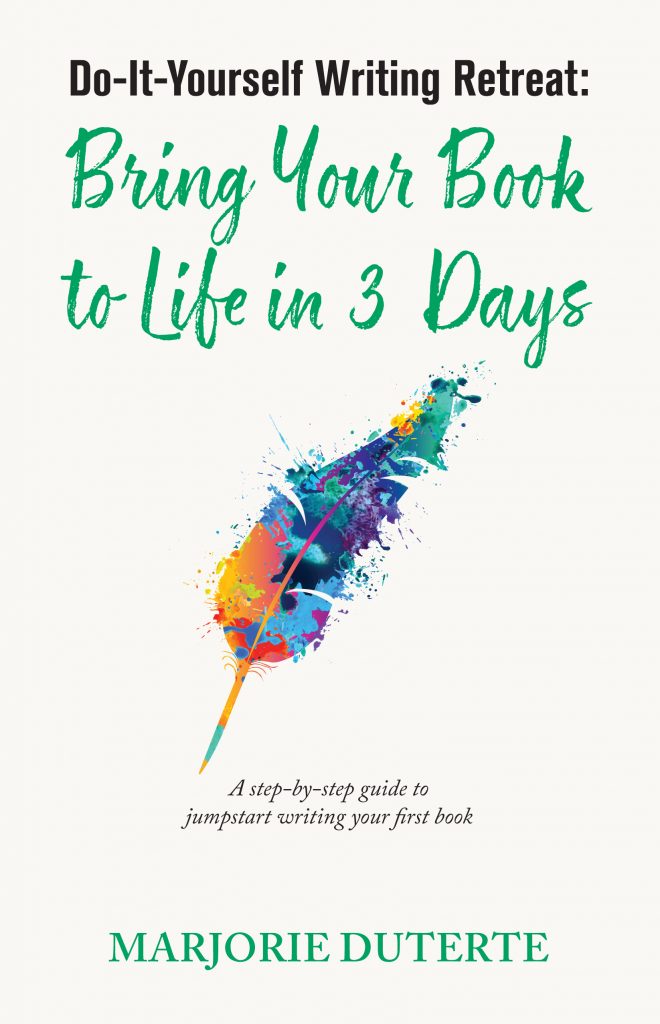